I got home from work early tonight, around six.  I love Fridays.  I would love them better if I didn’t have to work Saturdays, but I haven’t had Saturdays off since 2002.  I’m used to it.  Besides, I have to admit that I’m kinda glad I won’t be free to watch the Cy-Hawk game.  My boys might not make a very good showing, and that’s always painful.  Especially if you happen to be anywhere near a Hawkeye fan who likes to gloat….  I digress….

I got home from work early tonight, and decided to whip up some tasty food before launching into my evening plans of cleaning!  I’m exciting, right?

I saw this recipe over at SkinnyTaste awhile back, and have been dying to put a spin on it 🙂 I swapped out the cheese for some creamy chipotle sauce, and added some pepper from my garden.

To get going, you’re going to want to thinly slice some steak.  I used two t-bones from my grandparents that happened to be in the freezer.  Side note:  steak from a cow raised by an eightysomethingish ‘retired’ farmer is A-mazing.  My gramps has been raising cattle since before my mom was born… now, I’m not saying my mom is old persay, I’m just saying that’s a long time to get good at producing beef.

Season up your steak slices with plenty of black pepper, and an all purpose seasoning of your choice.  You could use Lawry’s.  You could use Montreal Steak Seasoning.  You could be cool like me, and use Penzey’s Old World Seasoning.  Keep these spices handy cause you’re gonna use them later on….

Alright, so next step, pop those little guys into a preheated skillet, and brown them for about a minute.  You will know when to flip them because a).  the edges will be a little brown and b).  they will come off the pan easily.  If they don’t want to turn, they aren’t ready.

Flip them over, and cook for a minute on the other side.  DON”T OVERCOOK!!!  Just enough to be brown, and not be bleeding.  You’ll want to pull the meat out, and put in a covered casserole, just a little guy, and start with some mushrooms.

First, bring the skillet back up to temp, and add a little bit of olive oil.  Not much, maybe half a tablespoon.  When the oil is heated, add your sliced mushrooms.  Let them cook down a little, and season to your taste with the pepper and all purpose seasoning of choice (APSOC) When these little guys are softened up, add them to the steak, and cover again. 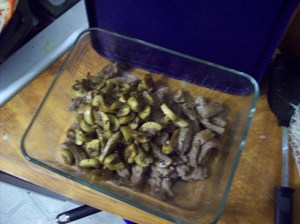 At this point, you are pretty much going to rinse, and repeat with the onions and pepper…  Preheat skillet, add some olive oil, toss in peppers and onions, season with APSOC…

Aren’t they pretty?  When these are soft, go ahead and add to your steak and mushrooms, then toss together! 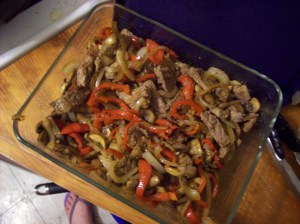 At this point, you can toast up some bread, or cut up a baguette.  I sliced some French bread that I had milling around the breadbox, and popped it into the toaster.  Fancy, I know.

Fill up your bread with some steak skillet, and add cheese, or a condiment of choice, or both.  I’m not going to be looking.  I used this NEW! Taco Bell Bold & Creamy Chipotle Sauce…. 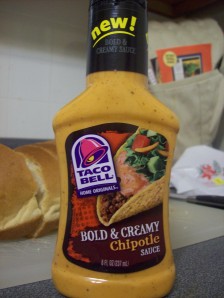 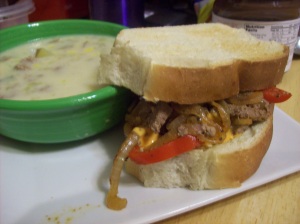 I served it alongside a bowl of sausage corn chowder that I spiced up with a couple jalapenos because i was in a “You Pick Two”  kinda mood.

Season beef with pepper and APSOC. Saute in heated skillet one minute per side til brown, and just barely cooked.  Set aside.  Bring skillet up to temp, add olive oil, and mushrooms.  Season and cook til softened, then set aside with steak.  Repeat with peppers and onions together.

Assemble sandwich with bread, and sauce.  Try not to eat the entire recipe alone 🙂

One Reply to “Steak Skillet Sandy…”