We celebrated the upcoming onset of fall this past weekend by trekking up north to Minneapolis/St Paul.  It was about time that we got out of Des Moines for a few days, and it couldn’t have been a more perfect weekend!

We drove up after I got off work on Saturday afternoon, and stayed with some good friends of our, the Hills.  Sunday morning we were treated with homemade cinnamon rolls, and breakfast with the very talkative Hill children… it was awesome.  Other friends visiting from Iowa City joined us for church, lunch after Kirsten’s black bean soup… YUM), and a trip to Minnehaha Falls…. 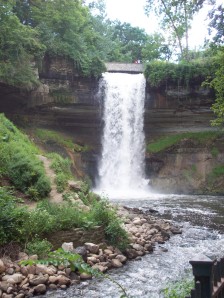 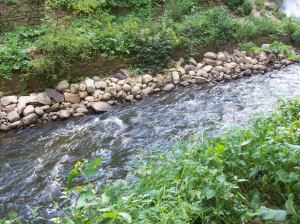 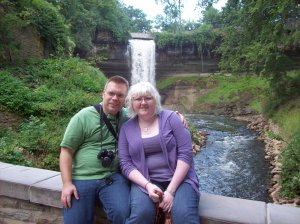 After the falls, we branched out on our own, and headed over to the Mall of America to do some shopping.  I am on the lookout for black and white work clothes since they are changing my dress code at work in a couple months.  Sadly, I had no luck at the MOA.  However, we DID try a cinnabon for the first time, and it was deliciously delightful, and I am very glad there isn’t one in my mall 🙂

After that we headed back to the Hills’ via…. 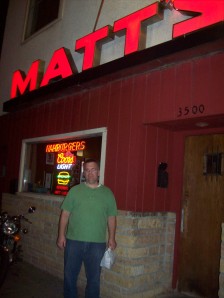 Matt’s Bar where we got ourselves a couple juicy lucys…two burger patties cooked together with molten cheese in the middle of them.  Delicious, especially since I didn’t end up with a molten cheese burn on my hand!

Toe end out our Sunday Madeline, age 7, read Matt, age 34, a bedtime story 🙂  The kids recited “If you give a moose a muffin: at the falls, and Matt only understood a fraction of it, so he wanted to read the actual story… Madeline did the honors! 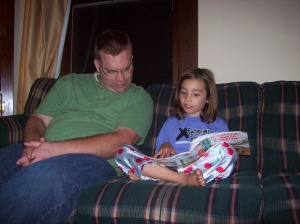 We ended the day with a rather tired game of Ticket to Ride during which Tony slaughtered the rest of us.  No fun… actually lots of fun I just hate losing.  I far prefer being the one to slaughter everyone else, he just got the good routes this time 😦

Monday was by far the height of the awesomeness of our weekend, though.  Kirsten and I got up early (well, for me anyway) and headed out to the half off sale at Saver’s… thankfully i found some black and white!  Then, Matt and I headed out to St Paul to see the King Tut exhibit!!! 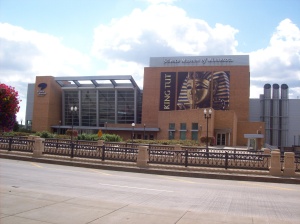 It was A-mazing!  I still am in awe.  I’ve always been fascinated by the ancient Eygptians, and after seeing so many artifacts close up, knowing that they were around 3500 years old and still going strong, I am blown away.

We tried to hit up an Itialian place for lunch near the museum, but it was closed for the holiday, so we ended up at the Uptown Diner…. and we will be having to go back many times until we have, in fact, tried everything on the menu!

We got a burger with sweet potato tater tots!!! 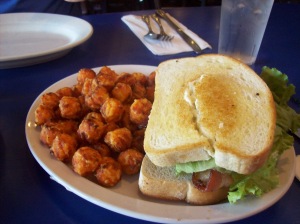 Let’s just say those fried, yet fluffy puffs of sweet potato were amazing… then we dipped them in maple syrup, and I thought I died.  Seriously.  WOW.  We opted for splitting the burger so we could try this: 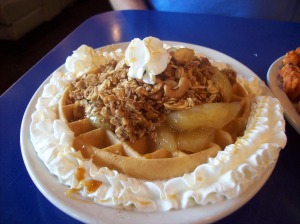 An apple crisp waffle.  Oh, yum!  We devoured it… down to the last bite 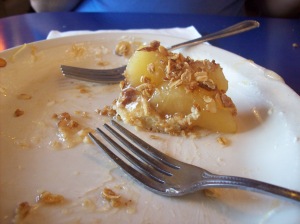 After some time has passed, I think I can now safely say that I prefer pancakes to waffles.  It’s a fact.  I don’t know why.  After lunch, we packed up our stuff and headed south… to Ikea! 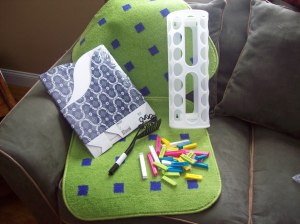 and we ended up with some cool stuff… two bath mats, some organizers for Matt’s woodworking magazines, a plastic bag organizer, a silicon whisk/spatula set (for .99 cents), and some bag clips…. all for the grand total of $18!  Not to mention, I got some great idea for the future!

We seriously got on the road then, stopping in Medford for some more work clothes hunting, and to met up with a friend who was in Iowa from MSP for the weekend to have ice cream, and meet her bf (whom we enjoyed).

The last stop of our journey was a Denny’s, where I got this sweet treat for a mere $4…. 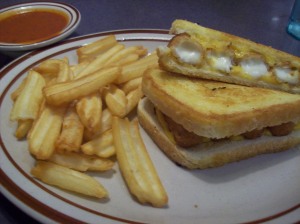 In case you are wondering… it’s a fried cheese sandwich… a grilled cheese with four mozzarella sticks in the middle.  It was weird, and it was good!

We are now safely home, I have had the entire day off… I slept in AND took a nap, and am wishing that Matt was home so I could go to bed.  But, truth be told, there is nothing better than getting to spend a few days with really good friends!!! 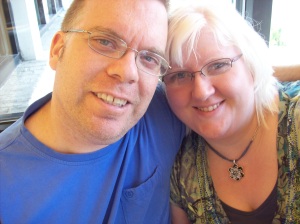 After having realized this about myself, how about you:  pancakes, waffles, or french toast???